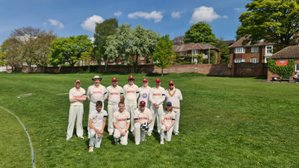 I’d doubt there were many senior members of the club who didn’t feel conflicted as they prepped their cricket bags yesterday. Glad to be able to play, desperately sorry for those who so recently no longer could, seeking the collective strength of being with team-mates and friends, but wanting to be close to children and family members as if that confers some form of protective umbrella over them. Leaving PCC just as Cal’s family and non-cricketing friends began to congregate for the minute’s silence at the club was a starkly real moment: grief is a fickle and unkind mistress. The thirds left this collective mourning to gear up to face one of our favourite opponents at Ovington. The Knavesmire was bathed in sunshine and a whisper of a breeze. The pitch had seen several games before ours, and had a touch of Knavesmire unevenness and live grass.

The Ovington captain is a good sort, and he got his players to join us for our minute’s silence, and took the photo that Jon put on the WhatsApp group yesterday. The game was – as always with them – played in a good spirit.

In the first game of the season Ovington had been on the wrong end of 300, and then being bowled out for 130. I had concluded that if we won the toss we’d bowl, as the most likely way of keeping a chase to a minimum. In the event Ovington won the toss and decided to bat. We kept them to 51 from the first 20. A sharp opening burst from Fred Nightingale with good shape; so many play and misses. Martin Kidd from the other end probed both sides of the wicket but without him or them connecting. It took til the 22nd over before we broke through, via Jon Latham – who bowled a beautiful 12 over spell – and the captain who took the catch at mid-off. Dover then took the other opener, courtesy of Latham at mid-wicket.

We introduced further variety in the bowling with Frank, who looked tricky when he found the areas, and Jonny who again took a valuable wicket. Nightingale and Kidd came back to restore some swing and seam order, Kidd picked up a very well deserved wicket and Fred bowled at the death in a way that was far more accomplished than his years. Whilst PCC contrived to drop six chances in the innings we were pleased when Ovington exhausted their forty overs and closed at 120-6.

Foley and Dobbins opened. Ovington found more life in the pitch than we had. Their skipper got reliable late movement away, whilst their other opener, a chap called Ranjan, who had umpired our entire innings, bowled with a slingy action and slammed the ball into the deck. This produced the occasional pea-roller and the equally occasional ball that leapt. Lee and James worked in a binary mode of crisply middling the ball and missing it completely. The opening partnership was broken with the unlikeliest of runouts, but Lee assured us he’d sacrificed himself for the good of the team: 16 made, two great cover drives in that mix. In strode Ashby promising a first ball ramp in honour of Cal. We were all quite glad when he’d talked himself out of it by the time he took guard. We knew he was going to bat briskly, as he’d quite noisily declared to himself several times that ‘I can’t stand watching cricket that’s less than 6 runs an over’… he’d have not survived last week’s game. Ashby played beautifully really, the quick hands and stable platforms saw some imperilled fielders getting closer and closer to the ropes.

James was castled by a sharply turning off-break from their young spinner, Blower. 37 good runs: on a true pitch, he’d have booked in for bed and breakfast. Jamie Kirby came in at four. A whirl of bat and pads saw him trudging back towards us – a mystery to me, what happened. Frank, with his expansive drives, went in at five. Much promise in his bat. And he deprived Ashby of a deserved 50 by nicking strike and moving the ball around. We passed Ovington’s 120 in the 29th over, to wild scenes of ‘thank goodness for that’.